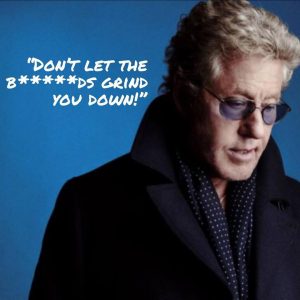 In May, 2008, 64 year old Roger Daltrey – lead singer from rock band The Who – told The Times newspaper in England how homeopathy had saved his infant son from life threatening gastro-intestinal problems. “I had a very, very dramatic experience with my son when he was nine months old. He had gastro difficulties, started throwing up, could not keep any food down and turned into skin and bone. At the hospital, they did every test to him, and in the end, they just handed him back to me. My wife and I were in bits. My poor baby. The kid was dying. It was terrifying.”

Having heard of homeopathy, Roger searched the Yellow Pages and consulted a local homeopath who prescribed a remedy for his son. Roger then described how within two days his son began to show improvement, and, “Within two weeks he was putting weight on, keeping the food down. The trouble recurred periodically for a couple of years, but he’s now 27, a fit and healthy young man.”

“The bizarre thing is that I’ve got a chiropractor friend in LA whose baby landed up in exactly the same state. He thought he was about to lose him. But I recommended homoeopathic remedies, and he recovered too. That’s God’s honest truth. Now I bet doctors would say, ‘Oh, they’d have got better anyway’. But I can’t believe that.”

Whilst a guest speaker in May, 2009, at The Prince’s Foundation for Integrated Health, First Annual Conference, held in London, Daltrey once again spoke about how distressing his son’s illness had been and the relief that came with homeopathic treatment.

Daltrey praised Prince Charles’ work as a supporter of complementary health therapies, and encouraged him to continue despite those who attempted to demean and detract from his efforts. He jokingly advised: “Don’t let the b*****ds grind you down!”

Roger Daltrey is among a long and distinguished list of musicians and singers who have spoken positively about homeopathy!

The health of our fellow Canadians is important to us.
Symptoms of acute conditions, like infections,
can be a challenge to deal with and impact our lives in
ways that we often times do not expect.
We are here to help.
Please CLICK HERE for assistance.

This website uses cookies to improve your experience while you navigate through the website. Out of these cookies, the cookies that are categorized as necessary are stored on your browser as they are essential for the working of basic functionalities of the website. We also use third-party cookies that help us analyze and understand how you use this website. These cookies will be stored in your browser only with your consent. You also have the option to opt-out of these cookies. But opting out of some of these cookies may have an effect on your browsing experience.
Necessary Always Enabled
Necessary cookies are absolutely essential for the website to function properly. This category only includes cookies that ensures basic functionalities and security features of the website. These cookies do not store any personal information.
Non-necessary
Any cookies that may not be particularly necessary for the website to function and is used specifically to collect user personal data via analytics, ads, other embedded contents are termed as non-necessary cookies. It is mandatory to procure user consent prior to running these cookies on your website.
SAVE & ACCEPT