Dr. Christian Frederick Samuel Hahnemann (April 10, 1755 – July 2, 1843) is the founder of Homeopathy. Dr. Hahnemann was a diligent scholar who achieved his medical degree at the age of 24. He also took up the study of chemistry, botany and a number of different languages.
✨
Medical practice at that time was based on purging the disease from the body. Bloodlettings, venesections and other forms of purgation 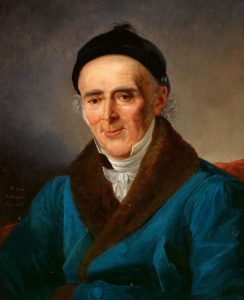 , violent laxatives and enemas were common methods of treatment. Small wonder that Hahnemann believed that more people died of their treatment rather than their disease!
✨
Frustrated with the method of medical practice and the state of healing, Hahnemann turned to the translation of books to supplement his income. He renewed his studies in chemistry and medicine and began to stress the need for public hygiene, for fresh air, adequate sleep, regular exercise and a sensible diet. Ahead of his time, Hahnemann wrote articles for medical reform which further showed his growing disenchantment with medicine and the medical profession.
✨
It was during this difficult time that Hahnemann performed an experiment that was to lay the foundation for his new system of medicine — homeopathy. It arose when he was translating a book, A Treatise on Materia Medica, written by a distinguished Scottish physician, William Cullen. Within the materia medica was an account of a drug, cinchona or Peruvian Bark, widely used for the treatment of malaria, which prompted the experiment.
✨

Ferrum Metallicum is a great Homeopathic Remedy for Anemia

Homeopathy has been quietly making an impact on the lives of many around the Globe.

The health of our fellow Canadians is important to us.
Symptoms of acute conditions, like infections,
can be a challenge to deal with and impact our lives in
ways that we often times do not expect.
We are here to help.
Please CLICK HERE for assistance.

This website uses cookies to improve your experience while you navigate through the website. Out of these cookies, the cookies that are categorized as necessary are stored on your browser as they are essential for the working of basic functionalities of the website. We also use third-party cookies that help us analyze and understand how you use this website. These cookies will be stored in your browser only with your consent. You also have the option to opt-out of these cookies. But opting out of some of these cookies may have an effect on your browsing experience.
Necessary Always Enabled
Necessary cookies are absolutely essential for the website to function properly. This category only includes cookies that ensures basic functionalities and security features of the website. These cookies do not store any personal information.
Non-necessary
Any cookies that may not be particularly necessary for the website to function and is used specifically to collect user personal data via analytics, ads, other embedded contents are termed as non-necessary cookies. It is mandatory to procure user consent prior to running these cookies on your website.
SAVE & ACCEPT